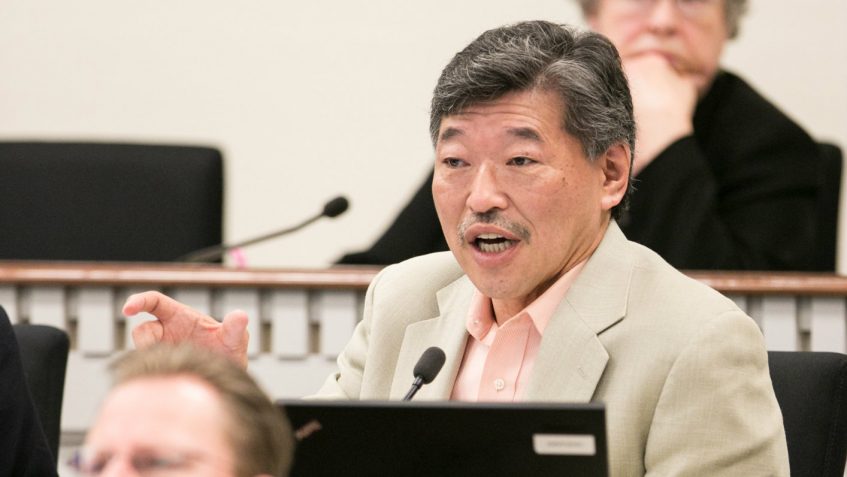 With the regular session of the Legislature scheduled to adjourn on April 26, the final weeks are mostly focused on passing the state’s two-year budgets. Writing these budgets is one of the most critical things we do in Olympia, so as final negotiations get underway, I wanted to take this opportunity to share with you what is in the two operating budget proposals that have become public in the past couple of weeks.

State Budget: Your Money, Your Future

Many of the priorities in the budgets overlap – including funding for early learning and K-12 education, higher education, and mental health services. But where the funding comes from shows a stark contrast between the two parties, as you can see from the chart below:

Citizens, advocates and newspapers across the state are calling out the Senate Republican budget for relying on “smoke and mirrors” tricks and gimmicks to fund the state’s needs. Even the Seattle Times Editorial Board said the Senate budget relies on “unsustainable gimmicks,” saying, “If some new revenue is needed — and that appears to be the case — the Legislature should vet a capital-gains tax proposal offered by the House Democrats.” In addition to the unsustainability of their budget, the estimated $75 million in savings from ignoring collectively bargained salaries between the governor and state civil servants is not actually allowed under state law.

You have heard me say it before, but Washington state has the MOST unfair tax system in the nation. If we don’t take the opportunity to address these inequalities in this budget, then we haven’t done our job.

Since our town hall on March 14, I’ve been getting a lot of follow up questions coming through my Olympia office. Getting your feedback through town halls, emails or calls is critical to my being able to best represent you in Olympia. And since many of the questions I’ve received touch on issues that affect all of us, I thought you might be interested to see some comments and Q&A that followed the town hall.

Examples of Comments and Feedback

Thank you for permitting me to attend the Town Hall Meeting on March 14th.

The meeting turned out to be more interesting than I expected; the format was very good. Thanks also go to your staff; they were very helpful. It was appropriate for us to work with pie-charts on Pi Day.

Those who participated definitely saw how ‘difficult’ it is to get consensus on topics related to money.

In our group of 4, two agreed on priorities, one was neutral and one opposed.  Same result for taxes. However, I am certain that you understand that the electorate puts you in that difficult position to do what must be done. Although not as ‘stupid’ as the folks in the ‘other Washington’, we expect the Washington State Legislature to reach consensus and spend the available tax $ wisely. As was demonstrated to us, there is a significant shortfall in revenue. I agree with you that the easy way to raise money is to increase Sales Tax, but that is very regressive. Therefore, I suggest that the Legislature obtain needed money by Referendum.”

Thank you all for your service.  This was my first town hall meeting.  It was enjoyable, enlightening, and left me with a concern.  My concern was the number people there that seemed to be there to support their one agenda.  I met 15-20 people during the budget phase and before and after.  Only one of those was not there for a specific agenda.  My hope is that you do not think that this is what the views of the mass population are.”

3) “You should not believe that the results of the [budget simulation] game we played relieves you from your responsibility to properly fund education.  Educating the children in our state remains the paramount responsibility of the state.  As you know, that means that your paramount duty is to properly fund that activity.  That means that funding of schools is not discretionary.  Either obtain more revenue or cut the budget of some other portion of the state’s budget.”

“What chance is there of ever overcoming the regressive sales tax system?”

If it were up to me, we would take up some key options tomorrow that would lift the burden off of working families in Washington, and diversify our revenue sources. About half of the state’s revenue comes from sales tax, with the rest made up by various licensing fees, property taxes, and Business & Occupation taxes. Washington state has the most unfair tax system in the nation, with people who make poverty wages paying about 17 percent of their income in taxes, and those making over $1 million paying under 2.5 percent.

We need to overcome our regressive tax structure – there is no question about that. But the chance of doing so is a different story. Options like a capital gains tax on the rich and a carbon tax on the state’s largest polluters need to be a part of the solution to addressing our unfair taxes. We could do this through the legislative process by putting these into the budget and voting on them. However, Senate Republicans have so far been resistant to these options, and I am deeply concerned it is unlikely we’ll be able to make necessary fixes to our tax structure this year.

Income inequality is one of the key issues facing our nation today, and if it isn’t addressed we will experience wide-ranging affects for generations to come. We have an opportunity this year to make Washington’s tax system more fair and fund important priorities like education, but I’m not so sure we have the political will in the Legislature to take such bold steps.

“Do you regret extending the Boeing tax breaks?”

The short answer is – I voted against the Boeing tax breaks that cut future state revenue by $9 billion. I think they were a bad deal for workers and Washingtonians when they were voted in back in 2013, and as the months and years pass it becomes more apparent how many jobs are lost by passing tax breaks without job creation and living wage accountability measures attached.

A bill before the House right now, HB 2147, would create some accountability if we give big tax breaks to corporations – so rather than these being a giveaway, turn them into an incentive to keep jobs in Washington state. Since 2013, Boeing has sent over two thousand jobs out of Washington, and there is nothing stopping them from sending more away unless we pass legislation that will incentivize companies like Boeing to keep jobs here, rather than giving the tax breaks without accountability measures attached.

“What progress do you think will made on funding McCleary this session? Will there be a plan to fully fund K-12 (about $4 billion)? If not, do you think school funding will go to the people for a referendum vote?”

The state Supreme Court, under the McCleary decision, has ordered the Legislature to fully fund education, and the state was found in contempt for not coming up with a plan to do so by last April. The $4 billion number you cite is also what I believe it would take to fully fund education by 2018. This would allow for significant improvements to class-size reduction, market based teacher compensation and lift some of the burden off of local property tax levies.

This year, I think we will need to put at least two billion additional dollars into K-12 to fund materials, supplies and operating costs, as well as make a down payment on underfunded teacher compensation. This might demonstrate we’re making progress and satisfy McCleary for the time being, but more will be needed in the next biennium. The two billion dollar question though, is where will the funding come from to do this?

I hope funding that ultimately passes will come through a variety of things, like using increased revenue from the improving economy, finding some savings in programs and coming up with new revenue that allows for responsible and sustainable funding for our kids’ education. In the last three biennia, since the Great Wall Street Caused Recession, we have made such deep cuts to our social safety net it is disappearing before our eyes. This has to stop. We can’t get out of our funding problems solely at the expense of poor and middle class families like we are now – we need to make our system more equitable by requiring corporations and the rich to pay their fair share.

With so much at stake, it is possible that any new revenue, like capital gains or carbon tax, will go back to the voters for referendum.

However, my feeling is that the people elected legislators to make these difficult and complex decisions because we have the best information to do so. I believe in the good people of the 11th Legislative District, and they are calling on us to fully fund education without destroying the safety net. There is no reason we can’t do this if we listen to the people who put us here, and pass common sense revenue before the end of this legislative session.

As always, thank you for subscribing to my e-newsletter. I appreciate and rely on your input in order to best represent you in Olympia – so stay tuned and stay in touch!

Resolution for a Washington State Bank

Senator Hasegawa talks shared prosperity on the “The Impact”