Resolution for a Washington State Bank

WHEREAS, the taxpayers of Washington state have demanded greater accountability and wiser use of the taxes they pay to benefit Washingtonians, not Wall Street; and

WHEREAS, a state bank owned by and for the people of Washington State would meet those demands by using taxpayer dollars to invest in infrastructure, student loans, create jobs, increase access to capital for small businesses by supporting local community banks, absorb debt capacity, generate revenue, avert long term debt payments to Wall Street, and keep taxpayer dollars in Washington state; and

WHEREAS, Senate Bill 5553 – Creating the Washington Investment Trust (2015) would streamline and create efficiencies of the State’s numerous existing revolving loan programs and leverage their capacity to work for the people of Washington State while lowering overhead and exercising efficiencies of scale, paying its own operating costs, and returning profits back to the state; and

WHEREAS, recent Washington State legislative sessions have exposed a serious lack of resource and bonding capacity to deal with the state’s overwhelming capital needs; and

WHEREAS, a state bank can grow in capacity to be an unparalleled resource for future generations of Washingtonians; and

WHEREAS, public banking is a bedrock of social development in most high achieving global economies like Germany, Japan, Brazil, Russia, India and China; now, therefore, be it

RESOLVED, that (name of your organization) endorses creation of a publicly owned State Bank, which shall be governed by an independent public Commission that is accountable and transparent to the people; and, be it further

RESOLVED, that (name of your organization) should work with others to convene a study group to examine the possibility of sponsoring an initiative of the people for the 2016 general election for the purpose of creating a publicly owned state bank; and, be it finally

RESOLVED, that a copy of this resolution be transmitted to the Governor, House and Senate leadership, and other civic minded stakeholders for further dissemination to, and education of, the general public. 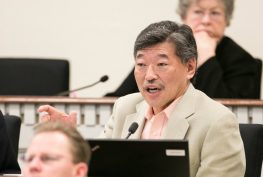 Senator Hasegawa talks shared prosperity on the “The Impact”