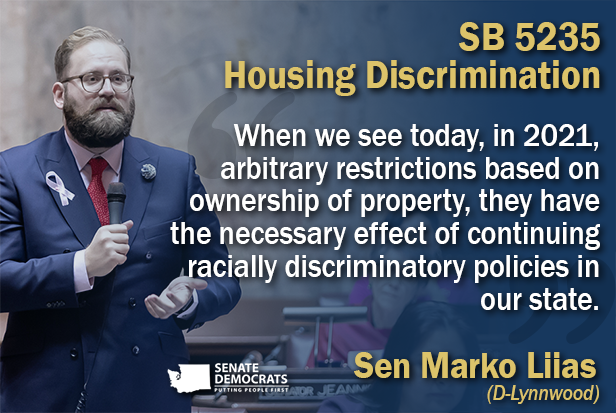 OLYMPIA – A bill to restrict local governments from enacting arbitrary housing restrictions on accessory dwelling units (ADU) and home occupancy was approved by the Senate by a vote of 43-6 on Wednesday.Add New

These arbitrary limits disproportionally impact historically and currently marginalized communities, and have contributed to widespread discrimination in the housing market.

“When local governments have restrictions in place that say you can’t rent to unrelated folks, or you can’t rent an existing ADU under certain circumstances, it takes those units out of the supply, driving up the cost for everybody else,” said Liias. [TVW Link]

Liias’ goal with this bill is to remove institutional barriers so that all Washingtonians can attain housing stability and security.

“This bill speaks to increasing our housing unit inventory, not by building new units, which we should have a conversation about, but rather by ensuring that units that are already in existence are not limited because of arbitrary restrictions in our local governments,” said Liias. [TVW Link]

Washington state has a shortage of affordable housing, a problem that requires solutions from multiple approaches, such as SB 5235.

Housing security and affordability is one of Liias’ top priorities as a lawmaker. A Liias bill from the 2020 session eased regulations for building accessory dwelling units.

SB 5235 will now go to the House of Representatives for consideration. It has until April 11 to be approved by the House to be eligible to become law this year.