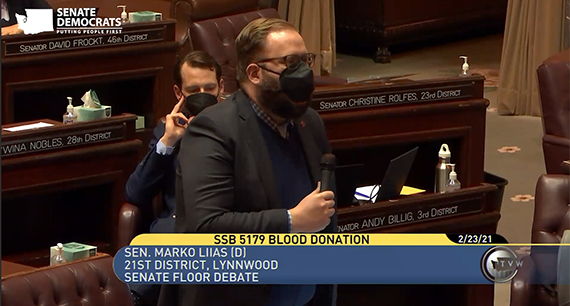 OLYMPIA – A bill to expand eligibility for a certain type of blood donation to 16- and 17-year-olds was approved by the Senate by a vote of 48-1 on Tuesday. [TVW Link]

SB 5179, sponsored by State Sen. Marko Liias (D-Lynnwood) would allow people ages 16 and 17 to donate blood through the apheresis process with parental or guardian permission.

“Every two seconds in the United States, someone needs blood or platelets. And because of the COVID-19  pandemic, our nation’s blood supply has faced critical shortages and has been pushed to the brink,” said Liias. [TVW Link]

“In honor of Grace, and in memory of her grandmother, Helen, I bring this bill to you that would allow 16- and 17-year-olds in our state, with the permission of their parent or guardian, to donate blood and platelets to help,” said Liias. [TVW Link]

Liias also noted in his floor remarks and committee testimony that the United States still has an outdated and discriminatory policy on blood donations from gay and bisexual men. He is an advocate for removing these kinds of barriers.

SB 5179 will now go to the House of Representatives for consideration. It has until April 11 to be approved by the House to be eligible to become law this year.