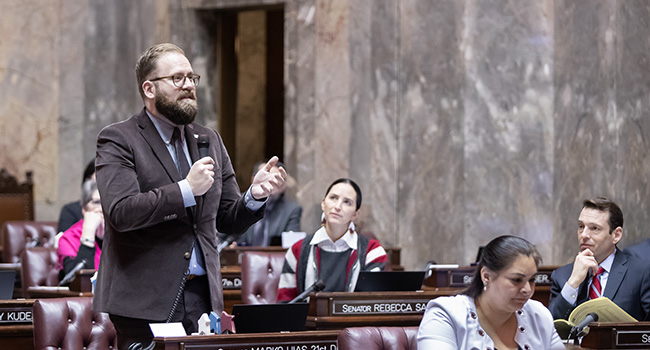 OLYMPIA – A bill sponsored by Sen. Marko Liias (D-Lynnwood) that would create a new state financial aid program for undocumented students was approved by the state Senate today by a vote of 34-14.

“We know that our undocumented students want to pursue the same opportunities and we want to help the state meet the degree attainment goals we’ve set for ourselves,” said Liias in public testimony in support of SB 6561. “But there are critical barriers to them in the way. We’ve done work as a state to clear our state-based barriers, but one big barrier that still exists is a lack of access to student loans.”

SB 6561 would create a state-funded, state-administered student loan program to help undocumented students who are ineligible for federal financial aid programs that cover the full cost of a degree.

SB 6561 would bridge the gap between undocumented residents who are eligible for in-state tuition rates but are currently not eligible for financial aid resources that are available to other students.

The rising costs of tuition have prevented many undocumented students from attending college even with the lower in-state tuition rate. The Dream Act, passed in 2014, expanded eligibility for state financial aid to undocumented students. That policy was further cemented with Dream Act 2.0 in 2018, which guarantees state financial aid eligibility even if the DACA program is removed at the federal level.

Another bill sponsored by Liias, SB 6142, would create a common application for admission to Washington’s public colleges and universities. SB 6142 received a unanimous vote on the Senate floor.

“This bill also builds on the really important work we did last year to expand higher education to all of our students across the state,” said Liias. “If we don’t remove barriers to access, then the work we did increasing funding for the Washington College Grant won’t be meaningful if student can’t access it.”

SB 6561 and SB 6142 now go to the House for consideration. The bills must pass the House by March 6 to be eligible for enactment into law.

The 60-day legislative session is scheduled to end on March 12.