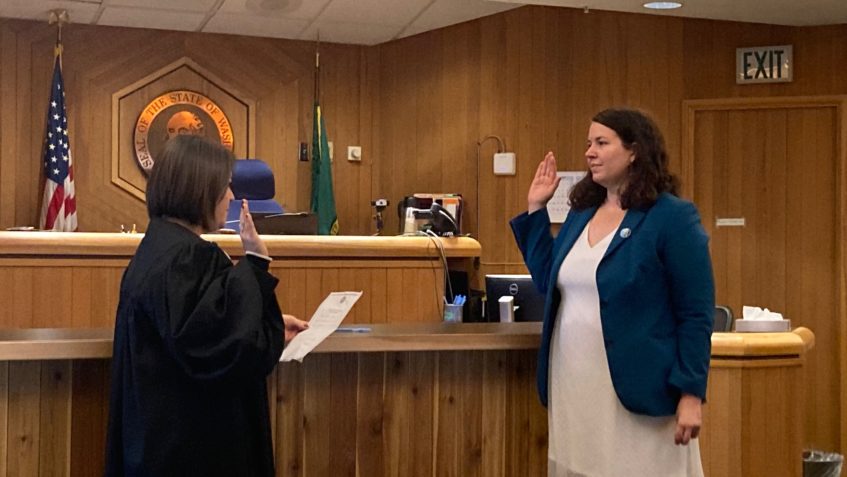 At a ceremony in Bellingham, Sen. Sharon Shewmake (D-Bellingham) was sworn into office today by Judge Cecily Hazelrigg with family, friends, and supporters looking on.

Shewmake replaces Republican Sen. Simon Sefzik in the Senate, who was appointed to replace Sen. Doug Ericksen after Ericksen’s death in late 2021. Shewmake defeated Sefzik in the 2022 election, and was sworn in to fulfill the final weeks of what would have been Ericksen’s term, followed by a full four-year term starting in 2023. Shewmake previously served in the state House of Representatives.

In the Senate, Shewmake is slated to serve as Vice Chair of the Senate Transportation Committee, helping to set statewide transportation policy and budgets, as well as sit on the Senate Housing Committee and the Senate Agriculture, Water, Natural Resources & Parks Committee. The Senate is scheduled to vote to confirm all committee positions on Jan. 9, the first day of the 2023 legislative session.

“I’m honored by the trust the voters placed in me,” Shewmake said. “On the campaign trail this year, I had the opportunity to speak firsthand with thousands of our neighbors here in Whatcom County and to hear about the issues and concerns that folks have, so I know we have a lot of important work to do.”

Shewmake plans to focus on issues including housing affordability, flood response and recovery, and public safety, among other issues.

“I’m excited to dig in with my new colleagues here in the Senate,” Shewmake said. “From helping families with affordability of housing and energy, to creating jobs and building our infrastructure, to ensuring we can all live in safe communities, there’s a lot to be done. I will represent each and every one of my constituents with integrity, honesty and a commitment to solving problems with my colleagues — regardless of their party affiliation.”

Outside of her legislative service, Shewmake is a professor of environmental economics, urban economics and energy policy at Western Washington University in Bellingham, as well as a children’s book author, spouse, and mother of two young boys.