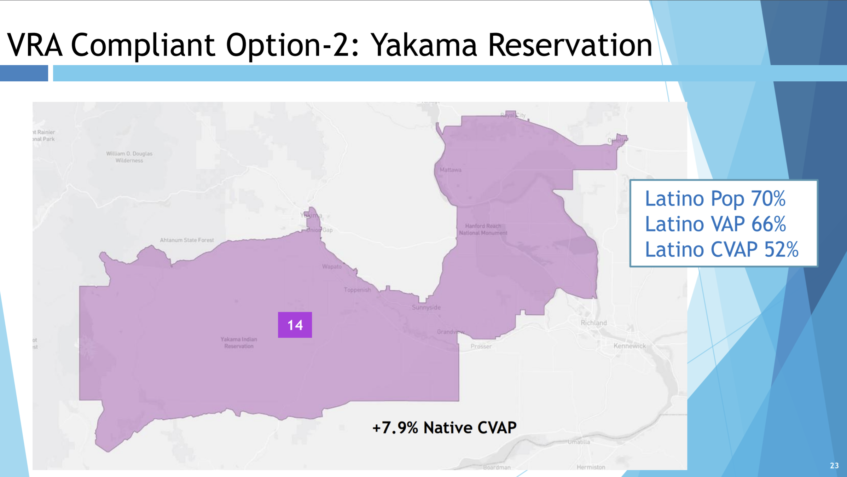 The Senate Democratic Caucus today released analysis from Dr. Matt A. Barreto, Political Science & Chicana/o Studies and Faculty Director of the UCLA Voting Rights Project, that demonstrates a requirement under the federal Voting Rights Act to draw a majority-Hispanic/Latino district in the Yakima Valley.

Section 2 of the federal Voting Rights Act specifically prohibits vote dilution for historically underrepresented racial, ethnic, and language minority groups. This protection was the foundation of successful lawsuits brought against the City of Yakima in 2012 and Pasco in 2016.

Dr. Barreto’s analysis found that to comply with federal law, the legislative map adopted by the Washington State Redistricting Commission must include a majority-Hispanic district based on Citizen Voting Age Population (not total or voting age population) that also has the demonstrated ability to allow Latino voters to elect candidates of their choice to the Washington State Legislature.

In his analysis, Dr. Barreto included two examples of a VRA-compliant 14th legislative district in the Yakima Valley. The first maximizes Latino CVAP but does not leave the Yakama Nation reservation intact. The second includes the entire Yakama Reservation within its boundaries, which has been requested by the Yakama Nation and overwhelmingly supported in public comment, while still surpassing the 50% Hispanic CVAP threshold.

While this is the first time Washington state legislative redistricting is subject to the federal Voting Rights Act, this law has protected the voting rights of Black, Hispanic/Latino, Native, and Asian voters across the country from California to Georgia since 1965.

Commissioner Brady Piñero Walkinshaw issued the statement below on the analysis:

“For a decade, Latinos in the Yakima Valley have voted for candidates of their choice but because of the way that the lines have been drawn, the political choices of those voters have not been reflected in their elected representatives. That’s why we have heard repeatedly throughout this redistricting process from the public that Latino communities must be kept together and allowed to elect candidates of their choice. Dr. Barreto’s analysis confirms that not only is this possible, but it is required under federal law.

“As the first Latino state redistricting commissioner, it is mission critical to me that the maps we put forward guarantee the voting rights of this historically underrepresented and marginalized community. There can be no doubt that the final map we approve in November complies with the federal VRA. That’s why Commissioner Sims and I will be releasing new statewide legislative maps early next week that both incorporate public feedback we’ve received in the last few weeks and include a VRA-compliant 14th district in the Yakima Valley. We encourage our Republican colleagues to do the same.”

Statement from David Morales, a Yakima lawyer and former member of the state Commission on Hispanic Affairs:

“The map created by Dr. Barreto shows that it is eminently possible to achieve a map that empowers Latino voters today and keeps the Yakama Nation in a single district. As I’ve said before, the federal Voting Rights Act will require the creation of a VRA-compliant district this year, and by taking this step the commission can avoid an inevitable legal battle. I want to thank Dr. Barreto for moving this important discussion forward.”