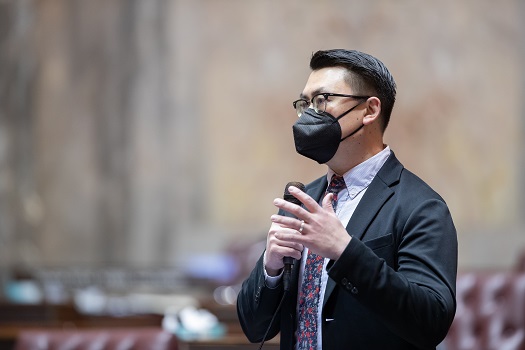 OLYMPIA – Gov. Jay Inslee signed a bill into law today that sets in place the most comprehensive standards for police officer arbitration in Washington in decades.

Senate Bill 5055, sponsored by Sen. Joe Nguyen (D – West Seattle), increases transparency and reduces the risk of bias in officer appeals of discipline and in the arbitrator selection process.

Recent research indicates that in law enforcement arbitration cases across the country, discipline was either reduced or overturned 52% of the time. While the research relied on a sample across 28 states, local and state policy makers have no comprehensive access to Washington-specific data. For the first time ever, statewide data about the number of discipline arbitration hearings and their outcomes will be collected and accessible to the public.

“By improving our policies one by one, we are doing important work to rebuild trust and heal our communities,” said Nguyen. “It may not be a silver bullet to fixing our criminal justice and policing systems, but this is a massive step towards comprehensive reform and a fairer process.”

Under the new law, an arbitrator from a roster of nine-to-18 individuals appointed by the Public Relations Employment Commission will oversee all law enforcement discipline arbitration cases in Washington. Arbitrators appointed to the roster will be required to complete six hours of training on implicit bias and anti-racism, along with six hours related to daily law enforcement experience.

The historic legislation was modeled after work done in Minnesota following the murder of George Floyd in 2020. It was passed with wide bipartisan margins in both the House and Senate after months of meetings with Republican colleagues, city leaders, police unions, and community members.