OLYMPIA – A bill to better protect workers during a public health crisis was approved by the Senate on a bipartisan vote of 40-7 on Tuesday.

SB 5254, sponsored by Sen. Jesse Salomon (D-Shoreline), would bar employers from prohibiting employees from wearing personal protective equipment (PPE) when a public health state of emergency is declared because of an infectious disease.

“I received reports from my district early in the pandemic that a few employers were denying the opportunity for employees to wear personal protective equipment because they were concerned that it would scare customers,” said Salomon. “I thought that was a very poor approach to public health that endangered all of us. It is reasonable to expect employers to allow employees to protect themselves and the public during this public health crisis.”

SB 5254 will now go to the House of Representatives for consideration. It has until April 11 to be approved by the House to be eligible to become law this year. 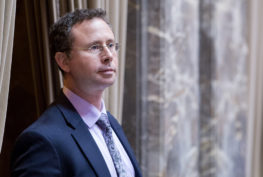