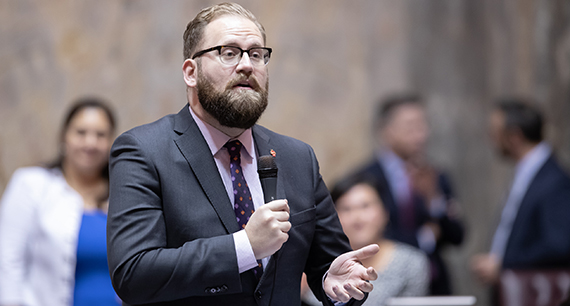 OLYMPIA – A bill sponsored by Senator Marko Liias (D-Lynnwood) that would enable more partnerships between local governments and community-based credit unions throughout Washington was approved by the Senate by a vote of 40 – 7  on Tuesday.

Under current law, community-based credit unions can partner with local governments in all but the five largest counties (King, Pierce, Snohomish, Spokane, and Clark) in Washington.

SB 5106 would eliminate the population restriction, thereby allowing credit unions in all 39 counties to partner with public entities to expand financial services and choices.

The bill provides more opportunities for Washington taxpayer dollars to stay in state where these assets can be better used for local community needs. All public deposits in credit unions are in local institutions based in and serving Washington residents, while about 70% of Washington public deposits held by banks are with out-of-state financial institutions, according to the Northwest Credit Union Association.

“The pandemic has provided yet another reason to pass this legislation,” said Liias. “As we’ve seen, in the counties where this can be done, partnerships between local governments and credit unions can be instrumental in delivering assistance. Because of arbitrary population thresholds, credit unions in our larger counties can’t be part of helping distribute small business assistance with all the flexibility they need in this critical moment.”

SB 5106 will now go to the House of Representatives for consideration. It has until April 11 to be approved by the House to be eligible to become law this year.

The 2021 legislative session is scheduled to adjourn in April 25.