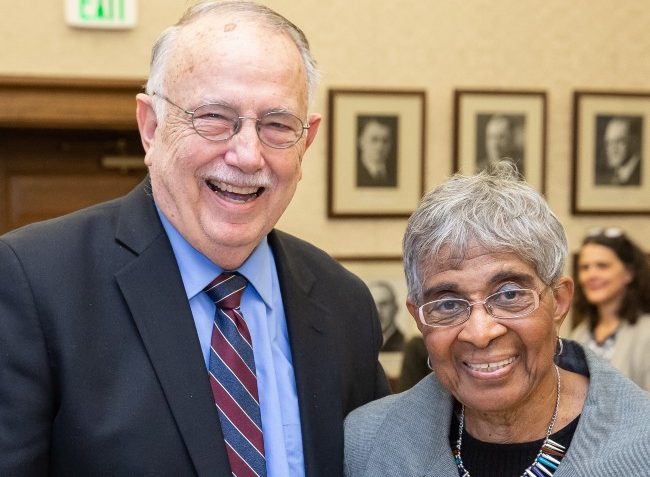 A groundbreaking former state lawmaker has chronicled her experiences in the Legislature in a biographical oral history.

All proceeds from sales of Rosa Franklin — A Life in Health Care, Public Service, and Social Justice will go into an account that funds Capitol preservation, the state library and archives, and the legislative oral history program.

“When Sen. Sam Hunt called me several months ago and said ‘the legislative oral history committee has voted for you to tell your story,’ I thought maybe he was kidding,” former Sen. Rosa Franklin (D-Tacoma) said Monday while being honored on the Senate floor. “It is indeed a deep honor to be back. It’s overwhelming, really.”

Franklin was the first black woman elected to the Senate and represented the 29th Legislative District in Tacoma for 20 years, but her long legislative career is only one aspect of her storied path. Sen. Steve Conway succeeded Franklin upon her retirement following the 2010 session.

Before Franklin won election to the Legislature, her 42-year career in health care brought her from South Carolina to Washington state and included stops in Brooklyn, Colorado, Germany, and the Madigan Army Medical Center in Tacoma, among other venues.

“Rosa Franklin’s lifelong commitment to social justice is an inspiration in a time when many have lost faith in government,” wrote Tamiko Nimura, the book’s author.

Franklin’s legislative achievements ran the gamut from establishing the state’s housing and anti-discrimination policy in her freshman year, to eliminating redundant requirements for nursing credentials, to enabling voters to approve public financing of election campaigns. She served as Democratic Whip, as Majority Whip, and twice as President Pro Tempore.