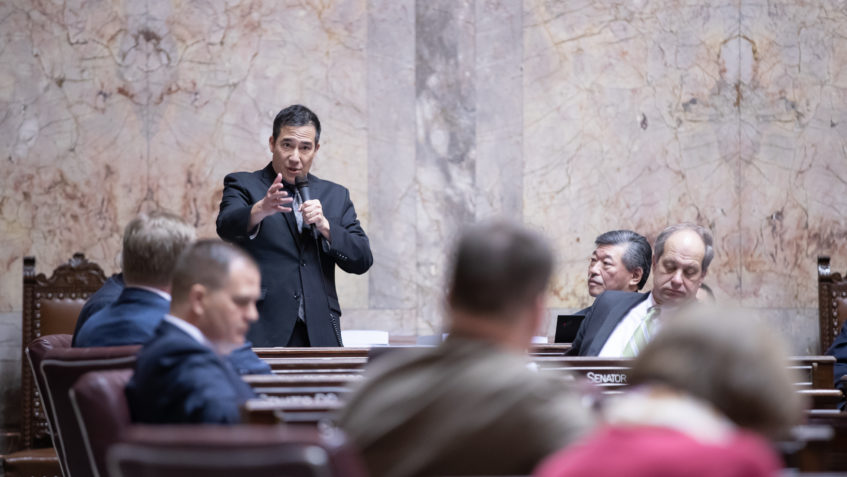 OLYMPIA – The 2019-21 Transportation budget cleared the Senate on Thursday with unanimous support.

ESHB 1160 will now head to conference where Senate and House transportation leaders will negotiate through the differences between the two chambers.

“This budget addresses the transportation needs of our state in a fiscally responsible way,” said Sen. Steve Hobbs, chair of the Senate Transportation committee. “This was a good, bipartisan effort to keep our promises and move our state forward.”

There are several highlights and new investments made as part of the $9.8 billion, two year plan including the continued delivery of projects first adopted as part of the 2015 Connecting Washington transportation package.

“We are keeping the promises made in Connecting Washington to reimagine transportation in Washington,” Hobbs said. “These projects continue forward and are complimented by the additional investments made in this budget.”

New investments include an $8.5 million investment in the creation of a project office to continue the work of replacing the Interstate 5 Bridge across the Columbia River. This office will begin the reevaluation of scope, schedule, and budget for a reinvigorated bi-state effort.

Additional investments include providing $35 million in savings and $20 million in toll revenue to advance the design and complete right-of-way acquisition for the I-405 north end completion. Several projects had funding advanced including $40 million for the SR 167/SR 509 Puget Sound Gateway project and $17 million for I-90 Snoqualmie Pass.

Ferry investments include providing for the start of building a new 144-car hybrid electric vessel as well as the conversion of two existing ferries. The ferries division was provided $990,000 for the planning work needed to prepare for hybrid-electric vessel terminal charging investments. The Colman Dock project in Seattle and the Mukilteo terminal also received additional funding to keep those projects moving forward. Also included is $160,000 for a vessel noise reduction study aimed at helping protect the endangered southern resident orcas.

“I’m proud of the bipartisan cooperation and outcome of this budget,” Hobbs said. “It’s yet another reminder that our Washington can still get things done while the other Washington is stuck in place by partisan gridlock.”