Sara Ronen serves as page in the state Senate 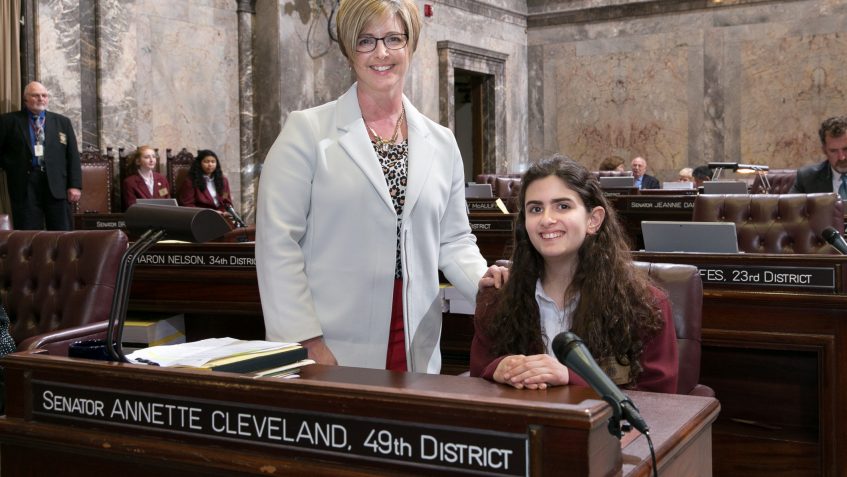 During the week of March 9, Sara Ronen served as a page in the Washington State Senate. Sen. Annette Cleveland, D-Vancouver, sponsored Ronen’s week-long experience in the Legislature.

“It was a pleasure to sponsor Sara,” said Cleveland. “She is a positive and intelligent student, and I hope she enjoyed her week in Olympia.”

During the week pages assist senators and staff, attend lectures with guest speakers and go to page school where they create their own bills in a mock committee setting. Ronen drafted a bill aimed at reducing child hunger. “The bill would allow for more free and reduced lunches, and give access to food in the summer for children who need it,” she said.

Ronen said she gained new perspective of government through the page program.

“I learned about the hearing process, and how much it matters to have a majority,” she said. “I also enjoyed paging on the floor. I didn’t know we’d be working so close to senators and where the public isn’t allowed to be.”

Ronen offered advice for anyone who might be interested in paging. “If you are interested in government or politics at all, you shouldn’t be scared to apply, it’s an amazing experience,” she said. “It was an honor to work here every day.”

In addition to state government, Ronen has an interest in international studies, teaching and joining the Peace Corps in the future.

Ronen, 16, is a sophomore at Vancouver School of Arts and Academics. She also participates in Model United Nations and choir.