A bill (HB 1306) to extend the expiration date of the Local Infrastructure Financing Tool Program (LIFT) from June 30, 2039 to June 30, 2044, was approved by the Legislature Thursday.

"This critical extension to finish the project and keep our promises to our community could not have happened without bipartisan teamwork,” said the bill’s prime sponsor, Rep. Sharon Wylie, Dr-Vanouver, who worked closely with Sens. Annette Cleveland, D-Vancouver, and Ann Rivers, R-La Center, to move the bill forward. “It is our job as legislators to strengthen economic development opportunities throughout our county. When we work together, we all win. I look forward to more cooperative efforts.”

“These projects are vital to our economic recovery in Vancouver, and this legislation is critical to allowing these projects to proceed,” Cleveland said. “This will not only ensure a brighter future for our community but will pay off in the short term in the form of jobs, revenue and prosperity.”

“Working with my colleagues to keep promises and make sure that businesses can grow is why I love this job. I am proud that we could get this done, even in a difficult year,” said Rivers.

While Wylie’s bill is necessary to keep the Library Square project in Vancouver moving, it also buys time for other LIFT projects throughout the state.

In 2006 the Legislature created the LIFT program to help cities and counties promote job creation and economic development. It allows local governments to capture a portion of sales, property and excise tax revenue coming into a designated area – such as money from increased commerce or construction to improve water lines, roads, affordable housing and other infrastructure necessary for development. LIFT helps local governments and communities draw in new businesses and help existing ones expand.

The Library Square project, explained Wylie, is a huge asset to downtown Vancouver, as it includes multi-story buildings, office and retail space, condos, a hotel and an underground garage for 400 cars. LIFT financing of approximately $15 million for this project will be used to purchase a portion of the underground-structure parking in the garage, which will be operated for public parking.

According to estimates by the City of Vancouver, with the LIFT extension Vancouver would get $8 million in revenue.

“The support of the community for the library, the philanthropy of our good citizens, and our partnerships with the private sector were all part of this success, and the benefits from this project will be shared by all,” Wylie said. “With this legislation and a rebounding economy we will now realize our dream of a high density, mixed-use urban center in the heart of our downtown.”

Wylie’s bill will also extend the time during which local jurisdictions can receive a sales-and-use tax credit as long as they begin construction by June 30, 2017. It will also provide a pay-as-you go option for the length of the program, rather than requiring construction bonds to be issued within five years.

Wylie explained that these changes won’t increase the bonding limit or raise any additional taxes. 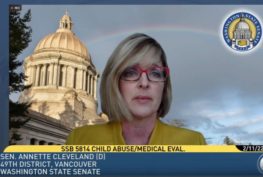