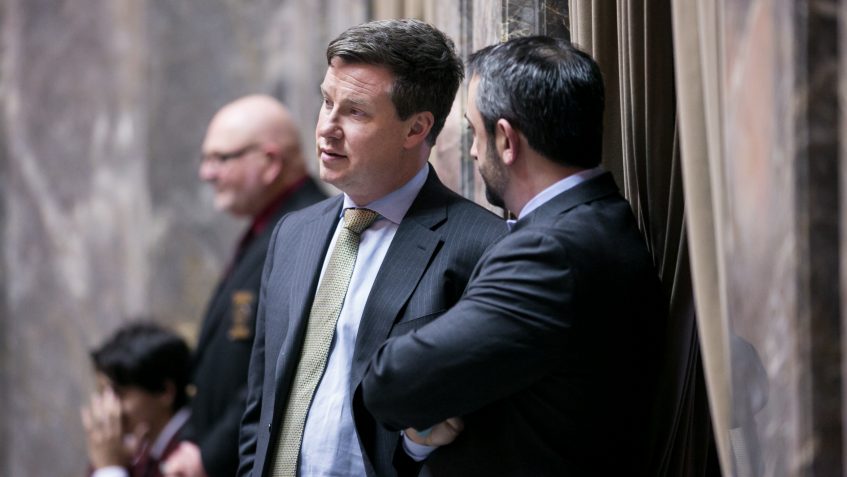 OLYMPIA – Sen. Mark Mullet, D-Issaquah, today called on the Seattle City Council to drop a proposal to tax large employers in the city to fund homeless services and affordable housing, citing the potential harm to job creation in Seattle and beyond, and warning that the plan could draw a response from Olympia.

The call came one day after online retail giant Amazon announced a halt to its expansion in downtown Seattle until the City Council votes on the proposed “head tax.” Supporters say the proposed tax of 26 cents per employee, per hour would target about three percent of businesses in the city, raising an estimated $75 million in the next year.

But Mullet – chair of the Senate Financial Institutions & Insurance Committee, which oversees aspects of housing regulation – said he disagreed with a plan that would “tax employers for providing jobs for Washington residents” and which he said would send the wrong message.

“Our committee goal is to send a message to the world that the public sector in Washington State will partner with the private sector if you are willing to set up business in our state and help create jobs,” he said. “The goal of attracting more jobs is too important to risk having a local municipality send the opposite message.”

Mullet agreed that more needs to be done to meet the ongoing crisis of affordable housing and homelessness across Washington. But he said the proposal’s benefits had to be weighed against the damage it could do – including the potential loss of thousands of jobs.

“Washington State, King County and Seattle have already dramatically increased funding and created new laws that help move people into permanent housing,” he said. “I know I speak for many of my colleagues when I say that more needs to and will be done to address homelessness at the state level. However, taxes can be an effective way to create disincentives in our economy. What message does Seattle send to companies by taxing the jobs they create in the city?”

Mullet predicted that the harm would not be limited to Seattle. As the owner of small businesses in King County, including a local pizza restaurant and ice cream stores, he said he could personally attest to the importance to the local economy of large employers that would be hit by the tax. He estimated that employees of companies like Boeing, Microsoft, Amazon, T-Mobile and Starbucks, and their families, made up about half of his customers.

He also cautioned that adoption of the proposed tax could lead to action in the Legislature.

“It is these sort of local actions that often require a state-wide legislative policy fix to make sure that the message to the world is consistent,” Mullet said. “We want people to set up shop in Washington and employ our residents. If they do, we’ll reward them, not penalize them through a head tax on employment.”