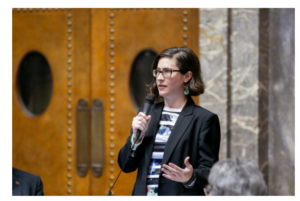 Sen. Liz Lovelett represents the 40th Legislative District in northern Puget Sound, including San Juan and portions of Whatcom and Skagit Counties. She was appointed to the Senate in 2019, won special election that fall, and was re-elected in 2020.

As a fifth generation Anacortes resident, Liz is rooted and invested in the 40th District. She is known throughout the region as a champion for our environment, housing, water management, refinery safety, and for looking for solutions to common issues that improve people’s lives and repair past harms. She served on the Anacortes City Council, and has been a board member for several organizations including Population Health Trust Skagit County.

Liz has a desire to foster working relationships between state government and the people she serves. With a goal to promote environmental stewardship, balance community growth and economic vitality, support rural issues and find solutions that put people first; she’s helping make Washington a sustainable place to live and work. Liz is the Vice Chair of the Environment, Energy & Technology Committee and serves on both the Housing & Local Government and Transportation Committees. She also co-founded the Ferry Legislator Caucus to advocate for much needed funding and improvements in service, and was appointed to the Joint Legislative Audit and Review Committee (JLARC) – both of which are bicameral and bipartisan.

Her expertise and collaboration have resulted in the passage of legislation to set guidelines for boaters to protect Washington’s Southern Resident Killer Whales, promote energy efficiency improvements in commercial buildings, expand access to safe and affordable housing for farmworkers, increase access to the Special Supplemental Nutrition Program for Women, Infants, and Children, and much more.

Liz is a mother, sister, and daughter of Anacortes residents. She has owned and operated a business, and likes to hangout with her kids, hike, and sing in her local band.