Both the Washington and Idaho legislatures were on duty during this federal Presidents’ Day holiday.

In Olympia, Washington legislators used Presidents’ Day as an opportunity to approve a large number of bills. At least three focused on health care and prescription drug costs.

One would limit the amount of money people pay when they pick up their medication. The bill is co-sponsored by Republican Chris Gildon of Puyallup.

Chris Gildon: “It says you can only charge the lesser of the insurance co-pay or the cash price, whichever one is cheaper. On average, I’ve heard you’re looking at a difference of between five to seven dollars, maybe. The most that I’ve heard is $70 per prescription. If you’re a senior citizen on a fixed income and you’re on three, four or five medications, you have to have those filled a couple of times a month, that’s real money, Mr. Speaker.”

Karen Keiser: “They will examine these specific drugs, not all drugs, but the ones that are really going on the upswing, and they will find out whether the prices are excessive or not. We need to have a view of what’s going on and we need to, subject to appropriation, make certain that certain drugs, determine that those drugs and their excessive costs on patients can be contained.”

The House voted to create a new Health Care Cost Transparency Board, which would track health care costs in Washington. Its supporters say that will help the state monitor  the trends of health care spending and more accurately forecast how costs will change.

Rep. Joe Schmick [R-Colfax] voted for it, but warned some of his Republican colleagues wouldn’t.

“Not saying that we shouldn’t be taking a look and seeing what’s driving the cost of health care and what can be done about it. But there are some concerns that once we establish that, what are we going to do with it and how is that going to be used?” Schmick said.

In Boise, the Idaho House approved a handful of bills, including one that would give vehicle owners three extra years before they have to replace their license plates. The current law mandates a change in plates every seven years. Rep. Jason Monks’ [R-Nampa] bill would stretch that to 10 years.

“We’re talking about 25,000 people a year won’t have to have their plates replaced if we change it to 10 years. What does that mean to ITD? It’s about $22,000 altogether, what they would lose on that. That’s not a big amount in the whole scheme of things and that’s money back into our taxpayers’ pockets and one less trip to the DMV,” Monks said.

Sims was appointed to the Senate in 2000 and served until she lost a primary election in 2002. She later was elected to three terms in the state House. Don Cheatham was one of three Coeur d’Alene senators who told stories about Sims on the Senate floor.

“My wife and I became good friends of Kathy. We went to dinner a lot,” Cheatham said. “I’d ask her, ‘What do you call your committee?’ I had to do that several times and finally she says, ‘Our committee’s name is CAVE.’ CAVE? She says, ‘Yes. Citizens Against Virtually Everything.’ Kathy was full of one liners and I have a lot of stories about her.” 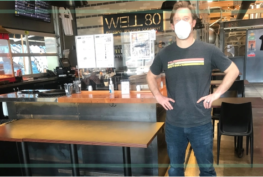 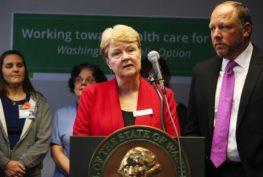