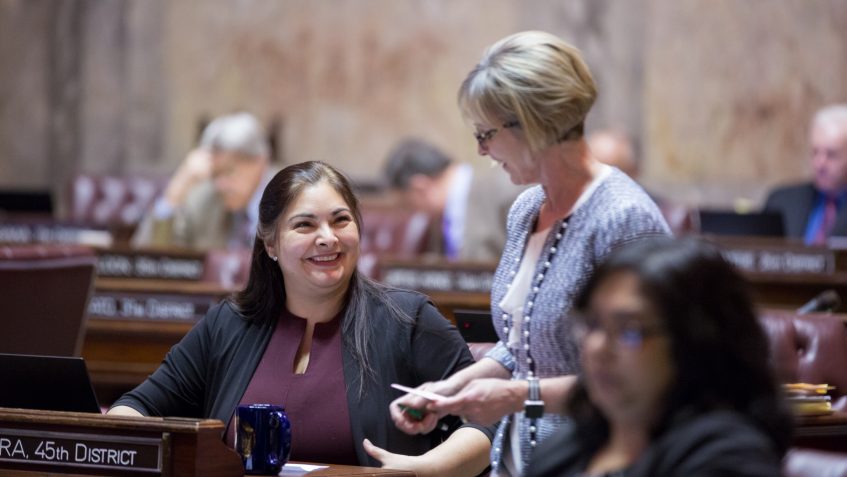 Taking action to safeguard the public against health threats like the ongoing measles outbreak in Clark County, the Senate passed House Bill 1638 on a 25-22 vote late Wednesday.

“We talk a lot about ‘protecting the most vulnerable among us.’ Well, protecting the most vulnerable among us is precisely what this legislation is all about,” said Sen. Annette Cleveland (D-Vancouver), who chairs the Senate Health Care Committee. “The threat of contagion from measles is real and it is growing, especially for infants too young to be vaccinated and for children and adults with depressed immune systems due to disease or cancer treatment.”

“It’s an unfortunate reality today that many people will sooner embrace conspiracy theories and alternative facts than proven science — a process that made passing this legislation harder than it should have been,” said Cleveland, who sponsored similar legislation in the Senate. “Vaccine deniers are no less a threat to public health than climate deniers are to our environmental health.”

Cleveland said the near party-line vote — no Senate Republicans voted for the bill and only one member of the Senate Democratic Caucus voted against it — demonstrated a commitment to act on the public’s behalf despite extremely vocal, organized efforts of vaccine deniers to intimidate lawmakers and confuse the facts about vaccinations.

“It’s our job to do difficult things, to ignore the noise and to execute our responsibilities as lawmakers to govern in the people’s best interest,” she said. “Putting people first means protecting the health and safety of all Washingtonians even when it’s the most difficult, not just when it’s convenient.”

Cleveland noted that the rate of measles cases in Washington plummeted from nearly 20,000 cases the year before the current measles vaccine was introduced, to fewer than 2,500 cases the following year, and to zero cases in 2000, when the Centers for Disease Control declared measles eradicated across the nation.

“The simple truth is that diseases like measles can be easily and safely avoided through widespread immunization — which is exactly how our country tamed what was once a raging threat to national health,” she said. “You cannot have an outbreak unless you have enough unimmunized people for the disease to flourish.”

Cleveland said she respects parents’ concerns of exposure to potentially harmful substances and agrees on the need to reduce or eliminate such exposures, but said it is important to pursue those efforts responsibly.

“Our world is rife with harmful chemicals, there’s no question of that, but not everything rumored to be harmful is in reality harmful,” Cleveland said. “Let’s work together, using science to focus on the true threats, and help dispel fears of threats that are unfounded.”