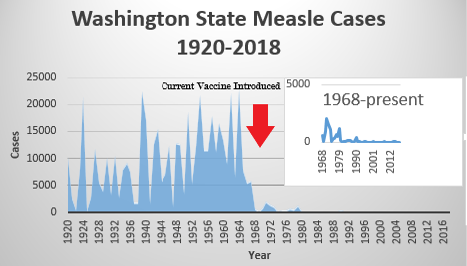 Legislation to address the health threat posed by the ongoing measles outbreak in Clark County awaits a vote of the full Senate after a key committee recommended its adoption.

“At a time when internet myths and alternate facts make it harder for people to know the truth about the science-based measures that keep our communities safe, we are taking action to protect the public health from highly contagious diseases,” said Sen. Annette Cleveland (D-Vancouver), chair of the Senate Health Committee. “Exposure to measles is a major threat to babies, pregnant mothers and people with compromised immune systems, and can be easily and safely prevented.”

As recently as 1964, more than 20,000 Washingtonians suffered exposure to measles in a single year, but the introduction of the current measles vaccine in 1968 reduced exposures to mere hundreds, Cleveland noted. By the year 2000, the nation was able to declare measles eradicated. Since then, however, an internet-fueled movement against vaccinations has led to a rise in unvaccinated children, with measles exposures reaching a 20-year high in 2014. In 90% of those cases, the measles patients either had not been vaccinated or their vaccination status could not be determined.

“Every credible organization, every science-based policy, and every peer-reviewed study consistently shows that vaccinations easily and safely prevent measles,” Cleveland said. “Most people understand this, but the loud voices of a passionate minority have sowed confusion and controversy about these reliable immunizations that have kept us safe for generations from diseases that once were common.”

“It’s essential we take action to keep the public safe from these highly contagious diseases, as the outbreak in Clark County shows right in our back yard,” said Cleveland. “The threat of contagion is real and it is serious, not only to other students but especially to infants too young to be vaccinated, to children and adults with depressed immune systems due to disease or cancer treatment, and to pregnant women.”

Cleveland’s amendment, adopted Monday in committee, removed language from five Republican amendments that had weakened the bill and retained language from a Democratic amendment that strengthened it. That amendment prohibits employees or volunteers from working at licensed child day care centers unless they present proof of immunization for the MMR vaccine or proof of immunity to measles from a health care provider or laboratory. The amendment provides for two exceptions: employees and volunteers for whom MMR immunization is certified as inadvisable by a health care practitioner; and employees or volunteers who have received the MMR vaccine or are immune from measles but need time to obtain and provide the records.

“We must take swift action now to prevent any additional needless suffering and the potential of death from this latest serious outbreak,” Cleveland said. “We must not forget that in the U.S., vaccine-preventable infections kill more people annually than breast cancer, HIV/AIDS, or traffic accidents. Approximately 50,000 adults die each year from vaccine-preventable diseases in the U.S.”

Diseases not only undermine the health of individuals and their families but also carry a high price tag for society as a whole, exceeding $10 billion per year in direct and indirect costs, Cleveland said. The measles outbreak in Clark County alone has so far cost the public over $1 million dollars.

The measles outbreak in Clark County has been declared a state of emergency by Gov. Jay Inslee and, among other things, has caused many children to miss school either due to illness or preventive measures by school administrators, Cleveland noted.

The number of confirmed measles exposures in Clark County has reached 73, with 53 cases between ages 1-10; 15 in ages 11-18, one case in ages 19-19; and four cases in ages 30-39. Sixty-three of the 73 had not been immunized, and three others had received a single MMR vaccine but not the second; the immunization status of the remaining seven others could not be verified. “Before the current vaccine became available, annual exposures were typically in the thousands, often topping 20,000; vaccinations eventually reduced the number of exposures to the hundreds and then to double digits for several decades now,” Cleveland said. “The central question before us is whether the right of one person to refuse a vaccine outweighs the rights of the larger community to be protected from a disease, and the numbers give a pretty definitive answer.”