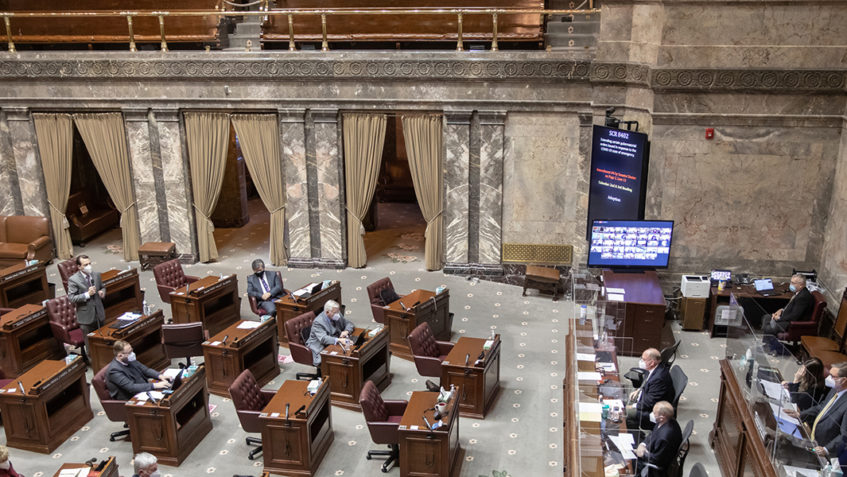 OLYMPIA – Two bills sponsored by Sen. Marko Liias (D-Everett) that would open up additional opportunities to go to college for more Washington students were approved by the Senate this week. In total, Liias had nine bills pass off the Senate floor before Tuesday’s deadline for policy bills to pass the Senate.

In addition to expanding access to higher education, Liias’ other priority bills now in the House of Representatives include:

SB 5194, also known as the Our Colleges Our Future Act

This bill requires that all community and technical colleges prioritize equity, diversity, and inclusion of all students by funding programs that are proven to benefit those most vulnerable in our higher education institutions. Furthermore, it modifies current statutes that hinder vulnerable students to create more equal access to these institutions of learning.

“These investments we’re making today will make our colleges more open, more accessible. They will tear down barriers, and they will ensure that in our Washington, we are investing in a skilled and strong workforce for the future.”

SB 5288 would expand access to higher education, especially for rural students, by making changes to the Opportunity Scholarship Program eligibility requirements. The bill removes the community college award requirement that a student must have graduated from a Washington high school and modifies the residency requirements for the rural jobs program.

“These are small but important changes to the Opportunity Scholarship Program to expand access to higher education, lead to more opportunities, and ensure more Washingtonians can earn college degrees.”

Under current law, community-based credit unions can partner with local governments in all but the five largest counties (King, Pierce, Snohomish, Spokane, and Clark) in Washington. SB 5106 would eliminate the population restriction, thereby allowing credit unions in all 39 counties to partner with public entities to expand financial services and choices.

“The pandemic has provided yet another reason to pass this legislation. As we’ve seen, in the counties where this can be done, partnerships between local governments and credit unions can be instrumental in delivering assistance. Because of arbitrary population thresholds, credit unions in our larger counties can’t be part of helping distribute small business assistance with all the flexibility they need in this critical moment.”

The growing amount of disinformation and online conspiracy theories poses a serious risk to society and democracy. One way to combat those problems is through increased media literacy education in our public schools. SB 5242 will create a grant program within the Office of the Superintendent of Public Instruction (OSPI) for supporting media literacy and digital citizenship.

Liias credits a constituent, Claire Beach, a retired educator, for bringing this to his attention.

“If you go back to the roots of our public education system in this country, the reason our founders believed in public education is because they knew an educated electorate is the foundation of a healthy and strong democracy.”

SB 5179, would allow people ages 16 and 17 to donate blood through the apheresis process with parental or guardian permission.

The idea behind SB 5179 came from Grace Griffin from Lynnwood, a constituent from Liias’ legislative district. Grace’s late grandmother needed platelets as part of her treatment plan. However, state law prohibited Grace from being a donor because she was under the age of 18.

“Every two seconds in the United States, someone needs blood or platelets. And because of the COVID-19  pandemic, our nation’s blood supply has faced critical shortages and has been pushed to the brink.”

More than 81,000 people died from a drug overdose in America between June 2019 and May 2020 according to the CDC and NCHS. More than 45,000 of those deaths were related to opioid use. This bill is part of the ongoing effort to address the opioid epidemic and aims to save more lives. Opioid reversal medication like Naloxone can be the difference in saving a life. SB 5195 requires hospital ERs and certain community behavior health agencies to dispense opioid overdose reversal medication to a patient with symptoms of an opioid overdose, opioid use disorder, or another adverse event related to opioid use upon discharge.

“Not enough people have life-saving opioid overdose reversal medication when they need it. These medications have proven to be extremely effective in reversing the life-threatening effects of an overdose.”

The Gender Affirming Treatment Act would prohibit health insurers from denying or limiting coverage for gender affirming treatment that is consistent with a protected gender expression or identity, is medically necessary, and is prescribed in accordance with accepted standards of care. Many health plans in Washington state classify gender confirmation treatment as cosmetic and therefore such treatment is often not included in health insurance plans.

“There is still one remaining area of profound discrimination in our health care system, which is the care that our transgender Washingtonians need. Gender confirmation treatment is medically necessary for many in our transgender community, but they are not able to access this treatment because it is considered cosmetic by many health plans. The goal is to ensure every Washingtonian has access to medically necessary care that allows them to lead healthy, productive lives. And to achieve the health equity and health outcomes we wish for every single Washingtonian.”

These arbitrary limits disproportionally impact historically and currently marginalized communities and have contributed to widespread discrimination in the housing market.

“When local governments have restrictions in place that say you can’t rent to unrelated folks, or you can’t rent an existing ADU under certain circumstances, it takes those units out of the supply, driving up the cost for everybody else.”

“This bill speaks to increasing our housing unit inventory, not by building new units, which we should have a conversation about, but rather by ensuring that units that are already in existence are not limited because of arbitrary restrictions in our local governments.”

Washington farmers produced over $3 billion in agriculture that require pollination from bees. However, bee populations in Washington state are on the decline, putting these crops and others at serious risk.

SB 5253 reestablishes the Pollinator Health Task Force to assist with implementation of the prior task force’s recommendations and the pollinator health strategy.

These bills are now in the House of Representatives for consideration. They have until April 11 to be approved by the House to be eligible to become law this year.