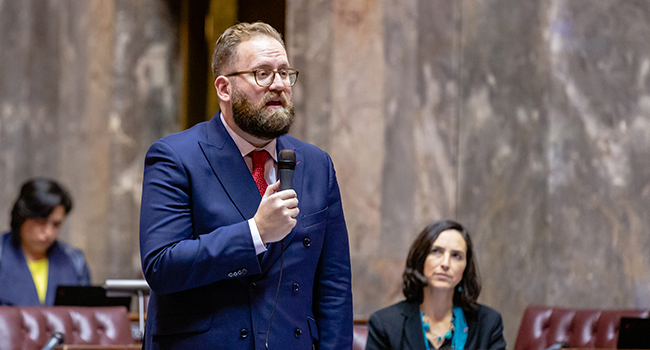 OLYMPIA – Legislation to prohibit health care providers and medical students from performing pelvic exams on women without informed consent was approved unanimously today by the House of Representatives.

The bill’s sponsor, state Sen. Marko Liias (D-Lynnwood), said Senate Bill 5282 is a great example of people directly engaging with their elected officials through social media about ideas for legislation.

“I was contacted in the fall of 2018 by someone on Twitter who said there was a practice, widespread across the country, of performing pelvic exams while women were under anesthesia without their consent to help train medical students and others,” said Liias. “I thought this sounds so outrageous, surely it cannot be legal. We had our team dig into it and, in fact, it is not prohibited in Washington to perform a pelvic exam on a woman when she’s under anesthesia without her consent.” [Link to audio file from Sen. Liias’ Senate floor speech]

If the bill is signed into law, a licensed health care provider may not perform or authorize a student practicing under the provider’s authority to perform a pelvic examination on a patient who is anesthetized or unconscious unless:

An amendment was added by the House to allow health care providers to perform pelvic exams in certain circumstances where sexual assault is suspected.

“This seems like a pretty glaring hole in our patient protections,” said Liias. “We want to make sure, while the practice thankfully is not happening in Washington, that we provide this really important protection.” [Link to audio file from Sen. Liias’ Senate floor speech]

The Senate first approved SB 5282 on Jan. 24 by a vote of 45-0. The bill now comes back to the Senate for a concurrence vote. Liias expects the Senate will vote to approve the House amendment.

The 2020 legislative session is scheduled to adjourn on March 12.