OLYMPIA – Today, legislators commemorated the anniversary of Executive Order 9066 – a wartime measure that sent 120,000 Japanese-Americans to concentration camps. A Senate Resolution honoring what is now called the Day of Remembrance, SR 8617, was offered by Sen. Bob Hasegawa, D-Beacon Hill.

“My whole family was sent to American concentration camps after Executive Order 9006 was signed by President Roosevelt,” Hasegawa said. “My parents, grandparents, aunts and uncles were all incarcerated without due process. And they didn’t talk about it much when I was growing up because it was sort of a community shame – even though they didn’t do anything wrong, they were treated as if they had been disloyal.”

The Northwest had several camps and “assembly centers” where families were held before being moved, including a facility on what is now the Puyallup Fairgrounds.

Nearly a hundred members of the Japanese-American community from across Washington came to the Capitol in honor of the day, including survivors of the camps, Nisei World War II Veterans and Boy Scout Troop 252 who presented the colors prior to opening ceremony.

“This is an important day not only for the Japanese-American community, but everyone in Washington,” Hasegawa added. “It stands to remind us of how precious our civil liberties are, and how vigilant we need to be to protect them.” 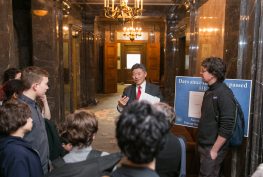