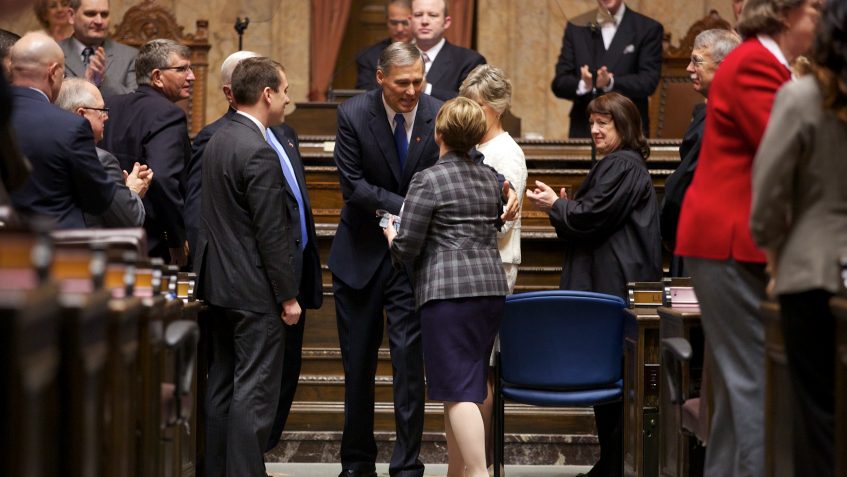 Sen. Annette Cleveland, D-Vancouver, and Sen. Tracey Eide, co-chair of the Senate Transportation Committee, today issued these statements commending Gov. Jay Inslee for his dedication and tenacity in trying to persuade the 2013 Legislature to pass a transportation revenue package that would have funded Washington state’s share of the Columbia River Crossing.

“There was a key group of players who never gave up on the CRC, right up till the final hours of session, and Gov. Inslee was prominent among them,” Eide said. “Whatever we asked of him, he provided, often without our even asking. He brought federal Transportation Secretary Ray LaHood to Olympia to amplify our message, and the two of them were very clear about the stakes. They left no question, not only of the need for a new bridge but of the reality that we would lose $850 million in federal funds if we failed to act.”

“I am saddened that some in the Legislature were unwilling to be partners in the prosperity of our state,” Cleveland said. “The CRC is critical not only to those in the Vancouver area who cross the river daily but to regional and statewide businesses that rely on I-5 for the reliable movement of freight. The short-sightedness of those who refused to invest in this state’s future will have negative repercussions for generations to come.”

“We still have until September to meet the deadline,” Eide said. “I hold out hope that those who have stymied the project so far will realize the stakes and join with the governor and us in moving our state forward in everyone’s best interests. If a project of this importance can be derailed for partisan political games at the local level, it bodes poorly for the future of transportation across our state.”