Sen. Don Benton’s continued efforts to stall the Columbia River Crossing are contrary to the interests of households and businesses in southwest Washington legislative districts, along the vital north-south transportation corridor and across the state Sen. Annette Cleveland, D-Vancouver, said today.

With the regular legislative session ending and a special session scheduled to begin May 13, Cleveland said she would continue to focus intently on the need to fund the replacement of the antiquated Interstate 5 bridges spanning the Columbia River between Washington and Oregon, the Columbia River Crossing project.

“I do not understand the intensity of Sen. Benton’s hostility toward the effort to replace the outmoded lift bridge after more than a decade of study, planning and stakeholder meetings” Cleveland said. “His willingness to squander $850 million in federal funds and $450 million in state funding from Oregon denies our region and our state the tremendous economic development and prosperity this project would bring.” The obstructionism of Sen. Benton and the opposition does not bring us closer to a solution”, Cleveland stated. “In fact, it almost guarantees another decade or more of work in order to start over on a project redesign.”

Public officials ranging from Gov. Jay Inslee to U.S. Transportation Secretary Ray LaHood have pointedly warned that the state will forfeit $850 million in federal funds for the $2.8 billion project if it fails to commit to its portion of funding by September 2013. The project plan calls for Washington and Oregon to each commit to $450 million toward the project. Oregon’s legislature has made the commitment, but Washington has not, largely due to opposition led by Benton within the Republican caucus.

“Failing to meet the deadline would be nothing less than fiscal lunacy,” Cleveland said. “The last time our state qualified for federal transportation funds, during the Obama stimulus, we actually wound up with even more than our share because we were awarded additional millions that other states lost by failing to meet the deadline. That’s the way it works — you snooze, you lose. If we do that this time, our funds will go to other states instead of ours.”

Additionally, if the state misses this year’s deadline, the CRC project would go to the back of the federal project list and might not be eligible for new federal funds for years, if ever. At the same time, the cost of building a new bridge would increase by $50 million to $70 million each year that the project is delayed.

“Sen. Benton’s opposition to this project is a mistake and it is a costly mistake,” Cleveland said. “Sen. Benton is asking us to make an $850 million mistake.”

Cleveland, who has worked tirelessly with her House seatmates to move the CRC project forward, said she remains steadfast in those efforts out of concern for the future of the communities throughout her district.

“I don’t think anyone should try to force my constituents and the voters of our region into giving up on the project after more than 10 years of plans, meetings, compromise, redesign and collective agreements, and after a poll released as recently as last week shows that a majority favors the project,” Cleveland said. “I will not stand idly by and let anyone drive us away from what is smart and right for our region and for the economic development and jobs we so desperately need to help us rebound from the Great Recession. I am not afraid to stand up for the future of this community as leaders before me have done”. 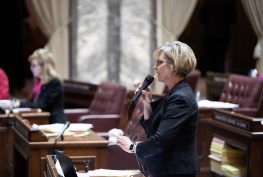