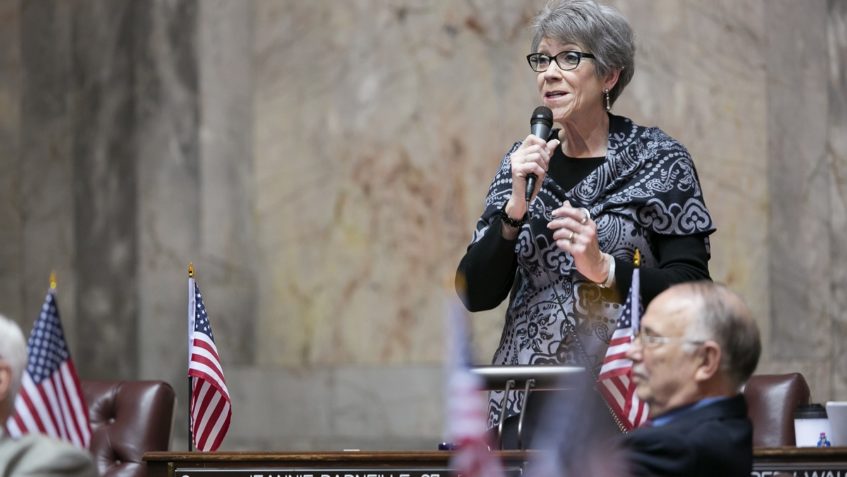 OLYMPIA – After over two decades of service in the Washington State Legislature, Sen. Jeannie Darneille (D-Tacoma) announced her retirement today after giving notice to Gov. Jay Inslee of her resignation. Her resignation will be effective this fall on a date to be determined.

“It has been a true honor and pleasure to represent the people of the 27th legislative district for the last 21 years,” said Darneille. “I ran for office because after almost 30 years of work experience in the nonprofit sector, I was very familiar with the issues facing the most marginalized people in our community, and I was determined to make a difference. I thank my community wholeheartedly for giving me the opportunity to go to Olympia and advocate for my constituents and for those whose voices often go unheard.”

Prior to joining the Legislature, Darneille had a 30-year career in higher education administration and management of nonprofit organizations offering social services. She served as Executive Director of the Pierce County AIDS Foundation when she initially ran for office in 2000.  Her work extended across poverty reduction programs, early learning, homelessness, immigrant and refugee assistance, and women’s programs, to name a few.

“Jeannie Darneille has spent a lifetime advocating for Washingtonians who have been left behind,” said Senate Majority Leader Sen. Andy Billig, D-Spokane. “Her compassion and hard work on behalf of the most marginalized in our communities is nothing short of inspiring. Sen. Darneille has worked tirelessly to reduce poverty, strengthen behavioral health, and reform juvenile justice. She has long been a champion for people in the most need of one and our state is better for it.

“I have known Sen. Darneille since I first engaged with the Legislature years before I was elected, and she was one of the first people I talked with when I thought about running for office. She has been a mentor ever since. We will miss her in the Senate but she is clearly going to continue serving our state in a very meaningful way.”

In the Legislature, Darneille has a well-earned reputation as a determined fighter for social justice issues. As chair of the Senate Human Services, Reentry & Rehabilitation Committee, she has sponsored and/or facilitated the passage of landmark bills to expand our social safety net, improve the child welfare system, reform the juvenile justice and criminal legal systems, reduce racial disproportionality in those systems, and expand services and opportunities for people who are returning to their communities after experiencing incarceration.

Through other legislation, committee work, and service on numerous task forces and commissions, Darneille has also worked to improve the accessibility and quality of behavioral health services, expand opportunities for accessible and affordable housing for all, increase education funding for all learners; expand health care for children, families, and people with disabilities; develop a safe environment for children and adults to learn, grow, and thrive; safeguard civil liberties; and promote economic opportunities for all people of Washington.

In a letter to her colleagues in the Senate on September 21st, Darneille wrote, “I will deeply miss working alongside my colleagues to implement policies that save and improve the quality of life for people in Washington.  The opportunity to launch the new Women’s Prison Division at the Department of Corrections is a rare transition in the life of a legislator.  I will have the unique opportunity to continue my work in criminal justice reform while pivoting to lead this transformative new division.”

Her four-year Senate term that began in January 2021 will be filled by a temporary appointee, who will serve through the November 2022 election. The appointee will be chosen by the Pierce County Council from a list of three names submitted by the district’s Democratic Precinct Committee Officers.